Now that I’m back from the west coast of Vancouver Island, I keep thinking about all the wonderful marine life (such as these beautiful sea urchins) that exists there. Karen and I were fortunate to see so many ocean creatures, both on the beach and in the Ucluelet Aquarium, which is a marvellous place to visit.

The aquarium was the first “collect and release” facility in the country, where marine animals are collected from the local waters and carefully housed and cared for in the aquarium for a few months, so that the public can see and learn about them. When the aquarium closes for the season, the creatures are returned to the ocean to live their life as before.

If you have never visited the aquarium, I highly recommend it! Another wonderful thing about our day there was finding our book West Coast Wild amongst many lovely nature books in their gift shop. If you check the photo posted here, you will see the book right in the middle of the display.

Also, for your viewing pleasure, here is a photo of a curious hermit crab.

I have just returned from the spectacular west coast of Vancouver Island, where Karen Reczuch and I were doing photo research for our upcoming book on tidepool creatures of this wild coastline. We had an amazing time and were lucky to find all kinds of hermit crabs, anemones, sea urchins, sand dollars, sea stars and more. Karen took some 600 photos!

I finished the text a few months ago and now Karen will begin her drawings, based on what we observed, both on the beach and in the wonderful Ucluelet Aquarium. (If you have never been there, we highly recommend a visit to this special place.)

In the photos shown here, Karen is in pink, photographing mussels and barnacles, and I am in blue, traversing the sandy beach and rocky shoreline in search of sand dollars, sea stars, crabs and interesting snail shells to show her.

The book won’t be published until Spring 2022, but it’s a lot of fun to watch it come together.

As summer draws to a close, I think about what a challenging time the last few months have been and am hoping that you are finding ways to stay happy and well.

Schools in my area will open soon and I send my best wishes to teachers, students and parents as they navigate the new approaches to learning.

As for me, I am grateful to have had a short holiday on the west coast of Vancouver Island, a place that continues to provide me with so much writing inspiration. Once again, I was able to walk the beaches, breathe in the sea air and view the spectacular scenery of that wild coastline. Here are some of the photos I took while there. Hope you enjoy them!

I’m just back from a little holiday on the west coast of Vancouver Island and feeling both relaxed and inspired by the beauty of that area.

I spent a lot of time walking the beaches, listening to the sounds of the ocean, and immersing myself in the magnificent scenery. One morning, I watched a graceful bald eagle soar overhead.

This is the place where West Coast Wild was set and an area I hope to return to often. Thoughts of a new west coast book are beginning to percolate.

Here is a photo I took of the beach at sunset. I felt lucky to be there.

Wishing you the best of summer, too!

I’m just back from a couple of days visiting schools in Pemberton and Whistler. It was wonderful to meet the teachers and students at Signal Hill Elementary and Spring Creek Community School.

Both schools are situated amidst the stunning nature of that region, with glorious mountains rising above them in Pemberton and a thick forest surrounding the Whistler school. (The photo shows the vista above Signal Hill school in Pemberton.)

The students knew a lot about the wildlife in their area and were happy to share stories of bears and other interesting animals they had encountered in their communities. And I had fun talking to them about the wild creatures I have come to know on the west coast.

These visits mark the last school talks for me for the school year – but what an amazing way to finish up!

Thank you to teacher-librarians Nicole Benes and Sara Leach for the invitations to speak at their schools and also to the staff and students at both places for their kind hospitality and warm welcome. It was lovely to meet you all!

Thank you to the wonderful town of Eden Mills, Ontario, for a marvellous weekend!

I’m just back from the Writer’s Festival hosted in that glorious spot and it couldn’t have been a better time. The setting is idyllic, under the sweeping trees and alongside the Eramosa River, with dozens of authors and poets reading their works to a most gracious and receptive crowd.

A few times over the weekend, I had to pinch myself to believe it was real.

The community (of about 350 people) pitch in to provide warm hospitality to the festival visitors and authors. A team of volunteers cooks and serves dinner to a great crowd of people on each of two nights, and serves up homemade pies for dessert. Not only that, but homemade champagne is poured! 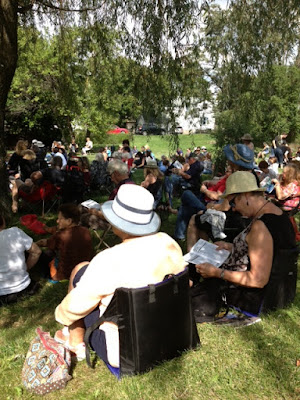 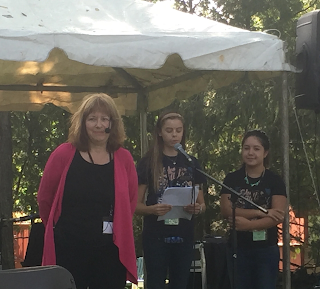 What were the highlights? There are almost too many to count:

– delicious food
– friendly volunteers
– a gorgeous natural setting
– sitting in the sunshine, listening to the authors and poets read their works
– the making of new friends in the Canadian literary scene
– catching up with old friends living across our vast country
– the amazing young student, Samantha, who introduced me at my reading — the best introduction I’ve ever had! Thank you so much, Samantha!
– the careful and competent organization of travel details, hotels and flights
– the kindness and generosity of everyone I met

I could go on… but suffice it to say, it was a weekend I will always remember.

My sincere thanks to everyone involved in putting on the festival. I feel enormously privileged to have been invited! One day, I hope to return. 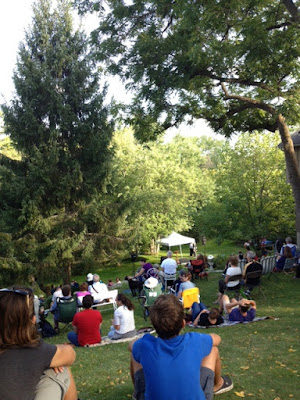 Tomorrow, I am on my way to a wonderful writer’s festival held in the scenic hamlet of Eden Mills, Ontario. What a privilege to be invited!

If you’d like to find out who’s speaking over the weekend, you can check this festival link.

And here’s a lovely piece of art showing the town and environs (borrowed from the Eden Mills website). I’m looking forward to spending the day on the banks of the Eramosa River.

I hear it’s going to rain (but I don’t mind — my umbrella is packed).

For the most part, I’ve had a “staycation” kind of summer (who invented that word anyway???). Other than a trip to the west coast of Vancouver Island in early July, I have been firmly planted at home.

It’s not that I didn’t want to go somewhere — I would have happily visited Haida Gwaii, the Great Bear Rainforest, Desolation Sound, the Saskatchewan prairies where I was born, or even Newfoundland! All of these places have great appeal for me.

It’s just that the sun was shining brightly in our fair city, the sidewalk patios by the ocean were inviting, the garden was in full bloom, and visitors were arriving in town to see us. So, it became a summer at home.

Added to the list of reasons to stay put were a series of small but necessary projects including: updating my website, writing a teacher’s guide for my latest book and re-organizing my computer’s filing system.

But there is satisfaction in getting these jobs done and looking forward to the fall where I will spend most of my time (I hope) writing something new. I have cleared the decks! No excuses now.

And with thanks to my dad, who is also a writer, here are two great quotes. The first is from C.S. Forester, who penned The African Queen and many other titles. He said, “A man who writes for a living does not have to go anywhere in particular, and he could rarely afford to if he wanted.”

And the second quote (again via my dad) is from William Faulkner, the Nobel Prize winning author and stay-at-home writer, who said, “I have travelled far in the town of Oxford, Mississippi.”

As I’ve discovered over the years, we writers can easily wander in our imaginations. No need to book a trip anywhere! 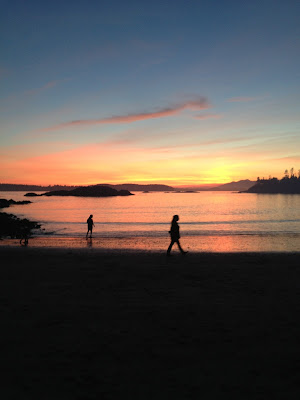 I’m just back from a family holiday on the far west coast of Vancouver Island (the subject of my new book). As you can see from the sunset photo above, it is a stunning area. I feel fortunate to be able to visit the region every year.

We spent a lot of time beachcombing and exploring tidepools with the small children in our family. It is thrilling to watch them discover all the amazing marine creatures that the shoreline has to offer: brilliant sea stars, pink and green anemones, scurrying crabs, clinging limpets, tiny fish and kelp of every description.

To me, the west coast is always a place of writing inspiration. When I walk down the beautiful stretch of beach, and hear the crashing waves and see the vast expanse of sea and sky, I begin to think that anything is possible. And that is exactly what a writer needs to believe. 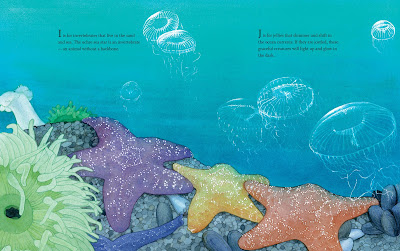 I am fortunate to be able to visit the far west coast of Canada almost every summer. It is a glorious place! So amazing, in fact, that I wrote a book celebrating the area.

If you haven’t visited the west coast, but you are intrigued by it, here are a couple of beautiful scenes from West Coast Wild: A Nature Alphabet. They are painted by the talented Karen Reczuch.

Enjoy! (And consider making the trek.) 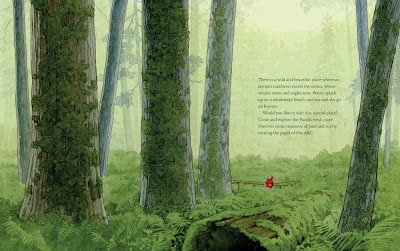